The Dutch Building sector was very clear about this, Boekel Ecovillage even won the public choice award during the Sustainable Built Environment Congress!
On July 1st 2021, the jury chose Boekel Ecovillage as the most sustainable organisation in the Netherlands, because this project combines an enormously wide range of aspects of sustainability: nature-inclusive, climate-adaptive, climate-positive, circular, biodiversity and social sustainability. The majority of the 36 social housing units in the strikingly circular project were built using natural materials and the rest were produced from waste materials. In addition, the professional way in which this citizens’ initiative was designed sets an example for others. 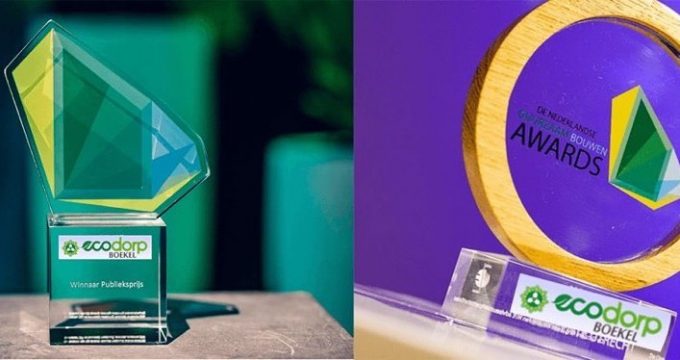 The jury, in the person of Robert Koolen, was very enthusiastic about the professional and integral way in which Boekel Ecovillage is organized. Koolen: “Not only in the formation of ideas and implementation, but also in the cooperation. It concerns innovative ideas that can be repeated in practice. And partly because of the self-sufficiency they are also affordable. Not only the whole, but also parts of it can inspire imitation. The direct link to the Sustainable Development Goals shows how you can translate abstract objectives of this kind into concrete actions.

Many residents contributed to the developments in Boekel, and Architectenbureau Van Laarhoven could not set the bar high enough with regard to sustainability. Most credits go to initiator Ad Vlems, said builder Patrick Schreven on behalf of Eco+Bouw. Schreven: “This dream took twelve years to realise, before it could finally land in the municipality of Boekel. Everything about this project is special, the way of thinking, building and organising, words fail us. A lot of respect goes to all those members and residents of the Ecovillage who are involved. They have more than earned this prize.

In Boekel it does not stop there, because the message and the technology – such as a special battery – are also made an example for others through guided tours. What’s more, the financial proceeds from the association’s own home, a corporation in miniature, go to other initiatives for ecovillages in the Netherlands. There are already seventy of these in the Netherlands. Boekel Ecovillage is part of Communities for Future and ECOLISE.